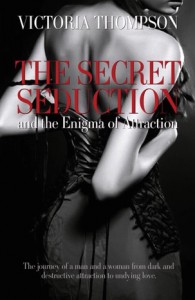 The Secret Seduction and the Enigma of Attraction is based on a true story Victoria wrote when she was a young woman but abandoned because of its very personal content. John Mitchell, psychoanalyst/psychotherapist and bookshop owner, encouraged her to re-work it because, he said, there is a great need for the story to be told — more people are seeing psychotherapists now than ever before. “And besides, it is such a damn good story!”

This book is important because it documents the dangers and pitfalls of what can happen during psychotherapy sessions. When two people are alone together, great intimacy develops; an emotional bond occurs between them. Freud maintained this was a necessary part of the process — for the patient to develop a transference onto the psychiatrist. Sometimes, something very dangerous and destructive happens — the countertransference. Countertransference is defined as redirection of a psychotherapist‘s feelings towards a client—or, more generally, as a therapist’s emotional entanglement with a client. Not much is written about this process — it is uncharted territory — and yet it occurs — with disastrous consequences for the patient, and also for the therapist.

Author and psychoanalyst, Jeffrey M Masson offered a quote after reading The Secret Seduction and the Enigma of Attraction, calling the story “erotic and hypnotic.” Anouska Jones, publishing consultant wrote: “An immensely talented writer. This is a very beautiful and compelling story. Would attract a cross-over readership of those who want to lose themselves in a tangled story of love, lust and betrayal, as well as those who are interested in psychology, and also drawn to literary fiction.”  Lee Kofman, author, wrote: “Victoria Thompson writes erotica so well and so bravely. The sensuality of this book is outstanding. But of course it isn’t its main theme. I read this as a haunting tale of two complicated, wounded, intelligent people trying to redeem themselves through each other, looking for salvation and almost finding it. This is a heartbreaking book.” And James Cowan, international best selling author and recipient of the prestigious ALS Gold Medal for literature: “This remarkable author has taken her reader to a place where few writers have been before. The professional bond between therapist and patient has at last been broken; now we are able to explore its tragic consequences. The Secret Seduction and the Enigma of Attraction glows like cobalt: its colours are often passionate, moving, and sad.”

James Cowan’s amazing speech at the book launch:
“Occasionally a book comes along which tests our capacity for honesty. This might sound surprising given that most novelists today would maintain that they present material to us that does just this. It is hard to write a novel that is psychologically exact, however. It is even harder to do so when dealing with the business of psychology itself – in this case, more specifically, psychiatry, and the relationship between clinician and patient.
Victoria Thompson has written just such a novel. She has taken on the unenviable task of peeling back the layers of secrecy that surround the inner workings of a psychiatrist’s practice in an attempt to shine a light on what can happen when patient and doctor find themselves unable to contain any normal professional etiquette.

In psychiatric terms, this is called transference and counter-transference. But in human terms it is known as love. Love is not a psychiatric condition, however, as we all know; and yet, in that particular psychiatric theatre, where mental aberration can sometimes be the norm, it can often be clouded by past guilt on the part of both parties involved. People surrender to their pasts, their loss and feeling of worthlessness, even as they struggle to maintain their emotional detachment.

One might blame the clinician for allowing such an event to happen. One might even blame the patient for projecting his or her deepest yearnings onto a person who ‘seems’ to be normal. In the end, when a line has been crossed, certain forces are released which are both powerful and uncontrollable. The two characters in Victoria’s novel, Andreas and Annabelle, cross that line. And they suffer the consequences.

Eros, in other words, becomes their panacea. It helps to smooth the edges of guilt, their past guilt, by way of a new dispensation – that of sensual pleasure. Victoria’s novel explores that realm painfully, and in depth. Her characters wrestle with their physical emotions in a bid to veil the terrain of their original sense of guilt. Of course, it doesn’t work for them in the long term. Andreas and Annabelle are forced to confront what inner growth means to each of them – and how that growth is being eroded by their misplaced allegiance to Eros.

Suffering, or course, is the result. Victoria’s characters do so terribly. They do not go through the motions of simply being so on paper; they reach out to us, to our own penchant for suffering, and make their ours. From a writer’s point of view, this is very hard to do – and is, in itself, quite an achievement. To experience anguish on paper is worse, sometimes, than suffering itself. Why? Because you begin to plumb its depths – to go beyond self-analysis towards the distant peak of understanding the truth of yourself.

A few great novelists of the past have made such a journey. I am thinking of Malcolm Lowry in his novel, Under the Volcano, where he traced out the anguish in the life of the Consul caused by alcoholism, all against a backdrop of Mexican madness and excess. The pain is acute and death-destined because of it. Loss of self, an inability to regain the harmony and balance of that self, inevitably leads to a painful outcome. Victoria’s novel charts the same landscape: soul-death is inescapable in one way or another.
In Benjamin Constant’s short novel of the early 19th century, Adolphe, a similar trail of suffering is evoked. An impossible love is played out between two characters, both of them mirroring real life people, the author himself and his elderly mistress, the legendary Madame de Stael, to the point where death ensues. It is as if a love that reaches beyond societal limits is doomed. And this is precisely what The Secret Seduction reminds us of.

Transgressing societal norms permeates Western literature as a theme. Whether it is Helen running off with Paris in The Iliad, or Anthony falling in love with Cleopatra in Shakespeare’s play, or Aeneas leaving Dido behind in Carthage in Virgil’s epic, The Aeneid, all these great events lead to a tragic outcome. A prolonged war, the loss of Egypt, and the death of two queens are the predictable outcome of such transgressions. People’s lives, spurred on by an overreaching and passionate love, are destroyed. When characters such as Andreas and Annabelle step outside their fictional norms, as they do in Victoria Thompson’s new novel, they become enmeshed in their own mutual feeling of guilt and loss.

Yet there is a redemptive aspect to it, and Victoria’s book is careful to emphasize this in her characters understanding of themselves. “You want what you fear most,” Andreas says to Annabelle, as he too comes to terms with his life dilemma. Loss and enchantment bedeviled both characters, and lead them to their respective crises, and the necessary setting-free from their respective prisons.
In the Prophetiae Merlini, one of the lesser known stories in the Arthurian legends, for example, the sprite Niniane envelops the sage in a skein of air in the forest of Brocéliande, visible as mist to others, but as a beautiful tower to him. Arthur, thankfully, never escapes his enchantment, unfortunately, whereas Victoria’s characters do. The mist clears for them, even as a sadness ensues. Unfortunately, it does not for Merlin, who remains in his mist-enshrouded universe for all time, a prisoner of enchantment.
This remarkable new book by Victoria Thompson partakes of important literary themes. Guilt, eroticism, love, loss and enchantment, these permeate the pages of The Secret Seduction. She speaks of what Goethe called Elective Affinities, and what draws people together in spite of their differences. I like to think of it in a more French way, in what they call les atoms cruchus, that of ‘linked atoms.’ People are linked by an alignment of spiritual atoms which they are often powerless to resist.

It is a sensibility all but removed from modern consciousness, and demands a particular impetus to bring it to life in our time. Benjamin Constant did it for his time as I have already mentioned. Andre Gide did it in his novel The Pastoral Symphony also, where he explores the tragedy of lost innocence between a pastor and a blind girl. Karen Blixen gives us another example of les atoms cruchus in her great work, Out of Africa, in the lives of herself and Denys Finch-Hatten, the big-game hunter, who both love one another deeply, in spite of their overriding need to be free.
Les atoms crochus, these elective affinities as Goethe called them, therefore trigger in us into a more intense, and sometime beautiful relationship with one another. This is how Victoria’s novel depicts it.

I therefore commend The Secret Seduction, and the Enigma of Attraction to you all tonight as an example of les atoms crochus, and the power of seduction. It is a spare and demanding book. While on the surface it is about transgression on the psychiatrist’s couch, and the dilemmas that ensue, it is about much more.
Victoria Thompson asks us to look into our own hearts, consider how we in turn might have crossed the line at some point in our lives, and try to make peace with ourselves. As vulnerable people all of us we have that right, even if we choose not to put aside our burden – but instead, carry it as a memory.
Thank you.”